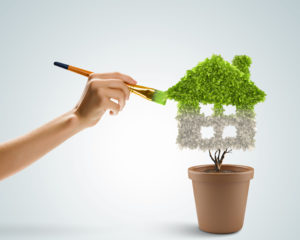 Florida law recognizes three basic forms of joint ownership.  Two of the three—joint tenancy and tenancy in the entireties—come with what is referred to as a “right of survivorship.”  What that means is that, when one co-owner dies, the surviving owner automatically receives full, undivided ownership of the asset.  By definition, a co-owner who holds a partial interest in a tenancy in the entireties or joint tenancy with right of survivorship cannot transfer that interest to heirs through probate—because the interest never makes it into the probate estate.  Also, with a joint tenancy or tenancy in the entireties, though, the joint interests must be equal.  The third ownership form and the focus of today’s topic is the one without a right of survivorship and that can be transferred through probate—is called tenancy in common.  Rather than owning a property together, tenants in common each own a percentage interest that can be transferred.  Florida law assumes a 50/50 split, but the percentages can be different if the owners decide otherwise. This means that tenancy in common and Florida estate planning strategies can be utilized for various purposes when a right of survivorship is not the goal.

Using a Tenancy in Common for Strategic Estate Planning in Florida

If an asset is owned by more than two co-owners, title is usually held as tenants in common, with each owner owning their respective percentages.  Because tenancy in the entireties is reserved for married spouses only, by definition it is limited to two owners.  Though uncommon, a joint tenancy can include three or more joint owners.  The way it works is that, when an owner dies, his or her interest merges with the interest of the remaining owners.  Instead of having a joint tenancy with three owners, for instance, you now have a joint tenancy with just two.  The process continues until only one living owner remains—and that final surviving owner then holds complete, undivided title to the property—kind of like Highlander.

For purposes of understanding a tenancy in common and Florida estate planning, it’s worth mentioning that, although real estate is the most common example when discussing joint ownership models, other assets can be jointly held, too.  In Florida, valuable personal property, financial accounts, and most other estate assets in Florida can be jointly owned as tenants in common, joint tenants, or tenants in the entireties.

Creating a Tenancy in Common in Florida

When starting your Florida estate planning, understand that tenancy in common is considered the default form of co-ownership in Florida.  If a deed with more than one owner doesn’t unmistakably state that the owners are tenants by the entireties or joint tenants “with a right of survivorship,” they are assumed to be tenants in common.  Tenancy in common can also be created through the “destruction” of one of the other two co-ownership models.  Joint tenancies are destroyed if a creditor attaches the property in Florida or if either owner transfers an interest.  In fact, transfer of an interest destroys a joint tenancy even if the transfer is from one owner to another.

Because tenancy by the entireties in Florida is reserved exclusively for married spouses, it can be destroyed by divorce.  If former tenants in the entireties are no longer married, they become tenants in common, with each assumed to own a 50% interest unless a property settlement agreement says otherwise.

Estate planners tend to like joint tenancy as well as tenancy by the entireties because they provide a clean and easy means of conveying property rights to family members.  The joint ownership interest transfers to the surviving owner outside probate, letting you avoid some of the time and expense of estate administration.  Sometimes, though, you want to leave your interest in a joint asset to someone other than the other owner.  When that’s the case, you need a tenancy in common for your Florida estate planning.  And the joint-ownership interest may need to go through probate administration in Florida.

Tenancy in Common in Florida Probate

In general, an interest in a tenancy in common is the only type of joint interest that passes through probate, and it can be transferred via provisions in a Florida last will or through intestate succession in Florida—more or less like any other property interest.  So, for instance, if you own a 50% share of an investment property as tenants in common with your business partner, you can bequeath that 50% share to whoever you want in your will.  After the estate is administered, the designated heir owns a 50% interest in the property alongside your business partner in Florida, as tenants in common.

But avoiding probate is a popular goal in estate planning.  So, why would you want to use a tenancy in common for Florida estate planning when you could avoid Florida probate with a transfer on death designation or joint tenancy?

The short answer is that it gives you more control over where your joint ownership interest eventually ends up.  If you and your business partner are joint tenants and you die first, your business partner now holds complete, undivided title to the investment property.  And your heirs don’t have any right to compensation for the interest.  On the other hand, a tenancy in common lets you leave your half of the Florida investment property to whoever you like (including the other owner, if that’s what you want to do).

Even if two co-owners are spouses in Florida and the elective share may apply, there are situations in which a tenancy in common is preferable to a tenancy in the entireties.  Say, for instance, a couple co-owns an asset, and they each have children from prior relationships who they want to inherit their respective shares.  With a joint tenancy or tenancy in the entireties, the surviving spouse becomes sole owner when the other spouse dies, leaving the first spouse’s kids effectively disinherited.  Tenancy in common allows both spouses to ensure that their children ultimately inherit their shares.  However, some additional steps under the Safeharbor Act in Florida would likely need to be taken.

Tenancy in common’s capacity to be inherited raises an interesting issue.  When the heir of a tenant in common receives the decedent owner’s share, he or she receives all rights attached to that interest—including whatever right to control the inherited asset the decedent had.  So, what happens if the surviving co-owner and the newly inheriting co-owner are not on the same page as to how a jointly owned asset should be used?

Let’s say, for instance, the Florida business partnership succession plan which involves a co-owned investment property is impacted when a partner passes away, leaving his 50% interest to a long-lost brother from Nova Scotia.  You and your partner have been profitably renting out the property for years, and you want to continue receiving the consistent passive income.  But your partner’s brother lives in Canada, and, after the estate is administered, he isn’t interested in being a landlord in Florida.  He just wants to cash out his inherited interest and be done with it.

You could try to buy out his half, but maybe he wants an unreasonable price.  Or, maybe you don’t have the liquidity for the purchase right now and don’t want to encumber the property to secure a loan.

Under Florida law, a co-owner has the right to file a partition suit asking a court to split a co-owned property.  That could mean physically dividing a property into two or more sections, but physical partition is usually only feasible with unimproved acreage.  If a property with improvements is involved, the partition complaint will probably ask for a court-supervised sale, with the proceeds to be split between the two owners.

Interestingly, this scenario is a potential problem even if the property in question is used by the owners as a residence.  Let’s say an unmarried couple co-owns and lives in a residence they purchased together.  They each have children from prior relationships who they want to inherit their respective shares, and so they elect to own the residence as tenants in common.  Upon the first owner’s death, his or her heir inherits a half interest in the residence.  The surviving owner still lives in the property, but the heir wants to force a partition.

The Florida Supreme Court has held that the Florida Constitution’s homestead provisions do not prevent a co-owner from forcing a partition sale.  So, absent proactive estate planning, there’s no reason why the heir couldn’t force the sale.

If the couple in the prior example was married, Florida’s spousal elective share and homestead laws might provide some protection to the surviving spouse (absent a spousal waiver) but could also impede the first spouse’s ability to leave a share of the property to his or her heir.  Even then, if the married couple divorces (and the property isn’t addressed in the divorce), there’s nothing stopping an ex-spouse from forcing a sale—even if the other still lives in the residence.

Tenancy in common presents some genuine estate-planning advantages in the right circumstances, but it also raises some potential challenges.  Fortunately, though, it’s nothing that can’t be addressed with proactive estate planning.  And, interestingly enough, one potential solution also avoids another drawback of tenancy in common by allowing a co-owned interest to bypass probate.

Tenancy in Common Outside of Probate

Even absent a right of survivorship, a well-thought-out estate plan can pass an interest in a tenancy in common outside probate, thereby promoting the owners’ privacy interests and avoiding the time and expense of probate administration.

One strategy is to hold a tenancy in common interest in a Florida revocable living trust.  Trust assets won’t be part of the probate estate, but, during life, the owner can continue to benefit from the asset as trustee and beneficiary of the trust. Returning to our investment property example, let’s say our two business partners both want their separate tenancy-in-common interests to pass outside of probate and to eventually end up with their respective heirs.  At the same time, the partners want to protect one another by avoiding the risk of a future heir deciding to force a partition sale.

To accomplish all of these goals, they could both transfer their interests into two separate trusts.  Each trust provides that, upon the death of the grantor / co-owner, that owner’s heir becomes the trust’s new beneficiary.  The trustee is directed to distribute trust income (i.e., the rent earned by the property) to the beneficiary but not to permit a sale without the consent of the other owner.  Alternatively, they could each name the other as successor trustee so that, when one partner dies, the other retains the right to control the property, while distributing half of the property’s income to the decedent partner’s chosen heir.

Florida’s co-ownership options open up a number Florida estate-planning possibilities for transferring real estate, while also raising some potentially thorny complications.  An experienced Florida estate-planning attorney can provide advice on how best to use the tools provided by Florida law to accomplish your objectives without bringing about any unintended consequences.

Next post: How To Title Real Estate For Asset Protection in Florida